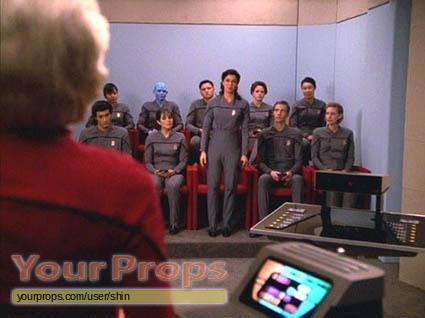 Basic Training Once a recruit enlisted and takes a oath to uphold the Federation Constitution and follow the orders of the Starfleet Officers appointed over them, he/she is shipped of to one of many training centers throughout the Federation worlds. Training consists of a 9 weeks were the recruit learns common crewman tasks. Throughout the training the recruit is tested in physical fitness, common tasks that would be needed on a ship, Starfleet protocol, and Drill and Ceremony. At the end of training all recruits are given a placement exam to determine there job and department.

A School and C School

After graduating basic training and promotion to Crewman Apprentice each recruit is the placed in a specific and sent to A School. A school is specific to ones job in Starfleet. Time differs for each job due to the complexity of the job the Crewman is learning. As opposed to Officer's Departmental training which is a general training in all functions of a department, A School focuses the training on a specific job in one department. For instance a Crewman may go to A School to learn to work a transporter, work in logistics, be part of a damage control team, etc. C School is even more advanced training for jobs that require extremely specialized training. These schools include Warp Core Management, Laboratory Technician, Nursing School, etc. The classes are lengthy classes that only the most astute and studious Crewman make it through.

The Master Chief Petty Officer of Starfleet (MCPOS) is the senior enlisted person in all of Starfleet, appointed by the Chief of Starfleet Operations (CSO) to serve as a spokesperson to address the issues of enlisted personnel to the highest positions in Starfleet. Exact duties vary, depending on the CSO, though the duties generally include traveling throughout the fleet, observing training and talking to enlisteds and their families.

After attaining the rank of Master Chief Petty Officer, servicemembers may choose to further their career by becoming a Command Master Chief Petty Officer (CMC). A CMC is considered to be the senior-most enlisted service member within a command, and is the special assistant to the Commanding Officer in all matters pertaining to the health, welfare, job satisfaction, morale, utilization, advancement and training of the command's enlisted personnel. CMCs can be Command level (within a single unit, such as a ship, starbase, or planet-side station), Fleet level (squadrons consisting of multiple operational units, headed by a flag officer or commodore), or Force level (consisting of a separate community within Starfleet, such as Starfleet Corps of Engineers, Starfleet Intelligence, etc.).

Nearly the highest ranking in the enlisted branch, the Master Chief has served with distinction for many years. A handful of master chiefs serve within Starfleet, all acknowledged leaders in their fields and commanding the respect of those beneath them. Such NCOs oversee important departments and can enjoy treatment almost like that of a distinguished officer.

Much like the Chief Petty Officer, the Senior Chief oversees departments of large numbers of enlisted personnel. Senior chief petty officers are few in number, have served in Starfleet for a long time, and are experts in their field. A senior chief could be viewed as the enlisted equivalent of a commander.

The Chief Petty Officers (CPO) oversees large groups of petty officers and departments underneath him. These NCOs typically have many years of service (usually over 15) and a wealth of experience in their field. When one becomes "chief" he garners a measure of respect for his accomplishments and proficiency. CPOs are sought out for their knowledge and experience. A Chief Petty Officer can command a major engineering or services department on a Starship or Starbase. Examples include the Transporter Chief of a Starship or the Chief of Operations of a Starbase.

(3rd Class)
There are three ranks of Petty Officer: third, second and first Class. A petty officer should not be confused with a commissioned officer in Starfleet, such as a Lieutenant or a Warrant Officer. The term petty officer still refers to an enlisted person. They are promoted from crewmen to 3rd Class, then 2nd, and then 1st.

Similar to a Crewmen Apprentice, these crewmen are given slightly more responsibility and are more knowledgeable in their fields. Crewmen do not oversee any other enlisted personnel and report to petty officers above them. They are enlisted personnel who usually have between 2 and 4 years of experience. Crewmen generally serve as Medical Technicians or Engineering Technicians and Security Personnel. Promotion to Petty Officer 3rd Class normally occurs from 6 months to a year time in rank.

These crewmen can also be referred to as "Specialist". The crewman is overseen by petty officers and has limited duties, usually seeing to a specific system or area of function. Crewmen Apprentice are enlisted personnel with typically less than 2 years of service. Promotion to Crewman after 9 months of time in rank.

The lowest rank of the enlisted personnel is Crewman Recruit. Is given to a recruit upon entering Basic Training. After 9 months in service a Crewman Recruit is promoted to Crewman Apprentice. Those that enlist with recommendation of a Starfleet Officer skip this rank.